Home Interviews Behaya; Is Being a Working Woman a Stigma in India? – In Talks with Vineeta Asthana

Behaya; Is Being a Working Woman a Stigma in India? – In Talks with Vineeta Asthana

Behaya!, the name of first hindi novel by aforementioned Vineeta Asthana will be out soon. The book is inspired by the true life stories of working women. Based on contemporary issues faced by working women in India and discusses their day to day struggle to manage work -life balance, while fighting against the Gender bias, Domestic Violence, being Objectified. What is disappointing here; is that women still take it up all with courage and Take care of both work and the household chores and all these sacrifices rewarded with thanklessness mostly.

It is a deep-rooted notion in patriarchy, always been projected that women need to hold the fort while men earn for the family. Despite a gradual change in the contemporary world, being a working woman is still a stigma; a mark of shame in a certain part of society. However, there is a significant increase in the involvement of women in private as well as government sectors but to contain, it is subsequently followed by the idea that household work are basic responsibilities of women and to peruse a job is her individual choice.

Fortunately, I secured a chance to interview Mrs Vineeta Asthana; author of Behaya, to discuss several societal disparities, gender policing and the roots of the cause. For those who don’t know, Vineeta Asthana is a well-known name in the field of Media and Academics. Mrs Asthana has worked with top media institutions, including, Indian Express Group, Network 18 Group, Dainik Jagran Group, and IIMC. She is currently working with IIT Delhi. 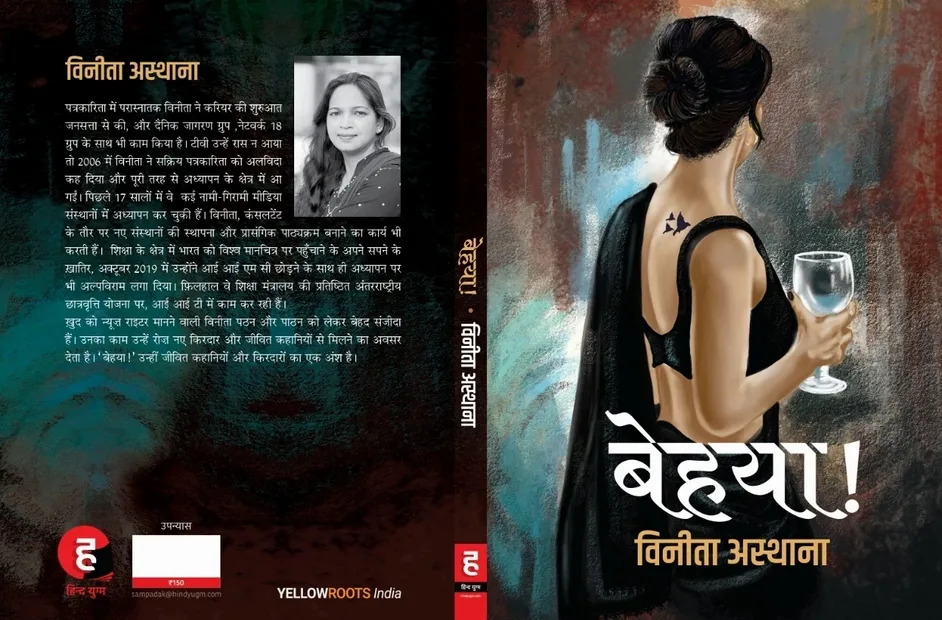 Shubham :- “Let’s talk about the Hindi title, as you told me, Mrs Asthana, that the book is going to be published in Hindi by prestigious Hindi Yugm Publication.”

Vineeta :- “My first book Siya in Exile did extremely well; it got all the recognition, was sold off really fast but I felt reach was limited, language was one constraint. Book was released in February, 2018 and I have been working to get it published in Hindi since then. So, I already have completed another book but I chose not to publish it before publishing Siya’s story in Hindi. This time, I did not want to go with self-publishing. It restricts your reach and recognition I feel. Because Siya in Exile was liked very much,  It sold off very quickly  but I was not satisfied with the marketing strategy in that case. I was looking for a prestigious publication house to pick it up for Hindi, I waited for two years and here we are, now!”

“When I wrote Siya, I first mailed the manuscript to Anant Vijay ji, known journalist and Senior from IBN 7 for his feedback. I wanted to know should I go ahead with the publishing of this content or should I just throw it on the bin. Anant ji liked it and suggested, That I should go ahead with publishing and should definitely think about Hindi version of the story. After a few months of Siya’s release I gave this manuscript for translation so that I get it published in Hindi, after a year and book went by 4/5 hands; what I received was the google translation of my Content, it totally killed the soul of the story. It was disappointing, but now I knew why it was rejected from so many places. I then decided to do it myself, almost rewriting it with the help of two friends.  (…) and Hindi Yugm showed interest in publishing Siya’s journey under the title Behaya!”

Shubham :- “I see, as we know, that north India majorly constitutes of Hindi linguistic people and when I say north India it’s like half of India. So, your book will reach about half of the population in our nation-state. Do you think that this book has the potential to stir or bring change in the society?”

Vineeta :- “Once someone reads the story, I am confident that it will leave impact on the mind. At least some food for thought to ponder. Though I feel; You cannot change a lot of people but, even if one person thinks positively about (working) women in his or her vicinity, I think my job is done. Because we cannot force and change everybody but if I can bring a small change in somebody’s perception in the way they look at the working women. I think my work paid off. Society has its issues , they exist for a very long time, It can not be removed in jiffy. Like we talk so much about the patriarchy, we talk about so many things but, what have we do to abolish it is very little… We could not do much, In fact, even in your house, if there is a boy and a girl and you will find that the boy is treated differently and the girl is treated differently, Not by the farther only but also by the women of the house. (…) They want the girl to work and let the boy relax and play.  My point is , this patriarchy is not only about men and oppressed women but also about how women are conditioned to treat and oppress other women using patriarchy  as a tool. It is more about women precisely. If I can change one percent of their perception about how they treat how they look at fellow women, it will be more satisfying than even winning an award. That is all I require.”